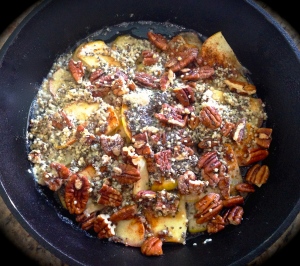 Phew!  What a week (or two).  The baby finally came, as much as I truly believed I would be the first woman to be diagnosed with permanent pregnancy.  I could see the headlines and everything.  Having a newborn in the house hasn’t left me a lot of time for cooking, blogging, sleeping…  And it’s really made me realize how much better I feel when I eat healthy foods.  We’ve felt so much support from family and friends through dinners and their general willingness to help.  It’s made me very grateful!  That being said, I’m really looking forward to getting back to my clean eating routine.  Especially with this strangely shaped post baby body.

I threw this together one morning before the wee one was born.  It’s so easy to prepare and really yummy.  You can almost convince yourself you’re eating an apple Danish.  Well, almost.  I guess it depends on how long it’s been since you’ve had a Danish!

Cover the bottom of your skillet with coconut oil.  Slice apple and spread in an even layer in the bottom of the skillet.  Mix coconut flour, seeds, pecans, cinnamon and salt in a small bowl.  Spread over the apple slices.  Pour honey evenly over the top.  Bake at 350 degrees for about 15 minutes.  Then, eat it!  You could eat this with yogurt or OOH! on top of pancakes.  I think I’ll try that next.